Please note this info is not to disrespect anyone, nor we want to look better then other. we are all tools of Nature and every situation We Human undergo is  based on our Karma. we do not take any credit nor we give any credit to other. our aim is to put truthful info here ,so our future generations will have more authentic info from more authentic source.

CLICK HERE TO SEE THE VIDEOS……..Maharajas and Their Power Struggle In British Raj…

Below statement from a Gandhian Scholar From Rajghat Museum New Delhi “These are the most amazing papers! Can I pass this on to the National Archives of India, Nehru Museum and Library, Sabarmati Ashram and National Gandhi Museum? They will be certainly enriched. Now I understand the significance of that letter of 1970.

I was so happy that you thought of getting in touch with me. Thank you indeed.”

Scroll down to read most powerful and amazing symbols of Gandhian Moment of Boycotting  British good.

These letters are the unique because the action was from one of the most powerful & oldest (400 years) business house in western India’s name Nautamlal B Mehta of Jetpur, especially at that time almost all Maharaja, all businessmen were pro British or “our interest mentality ‘acted as British agents, at that time Nautamlal B Mehta and His family and family gave up everything for national pride and Freedom from British to support Gandhian Moment & Value through Tan, Man, Dhan.( through body, through mind, and through Money)

India 1930s BOYCOTT BRITISH GOODS Rare History GANDHI Offered here for your consideration is a lot of items related to the Mahatma Gandhi’s “Boycott British Goods” movement. This is a small collection of three covers and five letters with Boycott British Goods hand stamps and labels. These letters are written by Shri Nautamlal Bhagwanji Mehta (Kamdar) and his family members. Shri Nautamlal B. Mehta was a prominent freedom fighter and supporter of Mahatma Gandhi. He was the first to use and bestow the title “MAHATMA” for Shri Mohandas Karamchand Gandhi. Shri Nautamlal Mehta presented a commemoration certificate to Gandhiji and in that certificate he used the title Mahatma for Gandhiji. The certificate was presented to Mahatma Gandhi at Kamri Bai School of Jetpur on January 21, 1915. From then on, Gandhiji was known as Mahatma Gandhi.

At that time the family of Shri Nautamlal Bhagwanji Mehta was major trader and the main agent in the Western States of India for European and North American products and services for at least 200 Years. When this family involved in the Gandhian movement, they became against using any British products and here, in the items offered, you can see the use of Boycott British Goods slogans in the correspondence of this family to promote the Boycott activity of Mahatma Gandhi.

When Gandhiji wanted huge amount of money to establish Gujarati Medium based University at Amedabad known as “Gujarat Vidyapith”, Gandhiji tried to raise the funds from Ghanshyamdas Birla, Jamnalal Bajaj, and Ambalal Sara bhai but all of them were afraid of the British anger and avoided to contribute. However, Dr. P. J. Mehta (one of the relative of Shri Nautmalal Mehta) and Shri Nautamlal Kamdar came out openly, bravely with intense nationalism and contributed Rs. 1,28,000.00 for the University.

Now, here are the images of the items offered and its details: 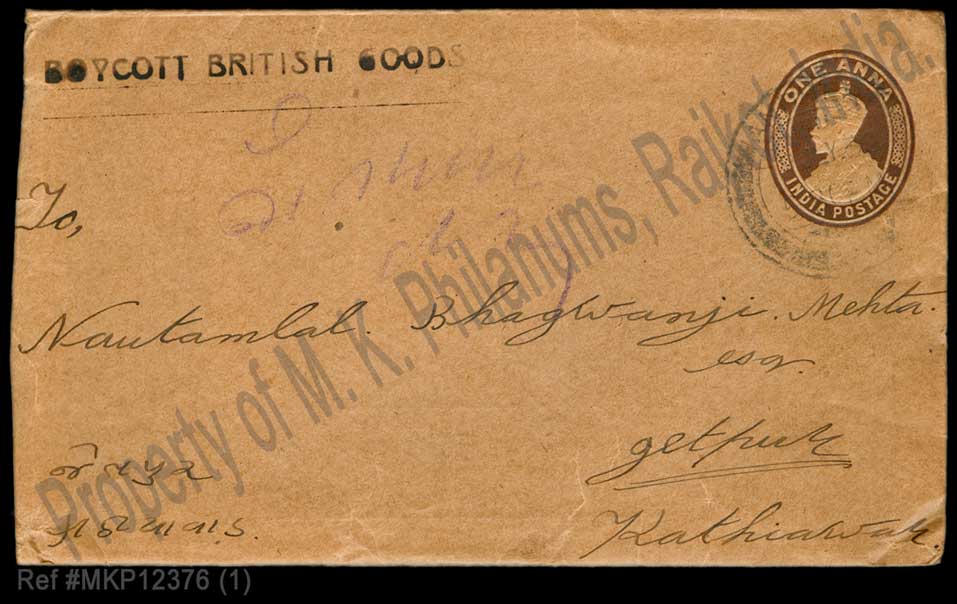 Below is the letter inside the above cover. Below is the translation of the important matter of the above letter:

Note written above the salutation: “I hope that you have received the twenty or may be thirty Patrika (booklets related to freedom movement) which Respected Uncle (may be Shri Chamanlal Bhagwanji Mehta? Younger brother of Shri Nautamlal B. Mehta) sent together four or five days ago. You must have kept the Free Press Journal file.”
2nd and 3rd Paragraph: “I knew that you purchased a book titled “Limbdi maa Police raj” (Torcher by Police in Limbdi). Buy if any book like this is available with Dave and Vyas (Book sellers). Do tell Kantibhai from Dave and Vyas to inform you if such book arrives.”

“Did Thakkar bapa (Amritlal Vithaldas Thakkar – also known as ‘Thakkar bapa’, a prominent Gandhian and an Indian social worker who worked for upliftment of tribal people in Gujarat state in India) visited there?” 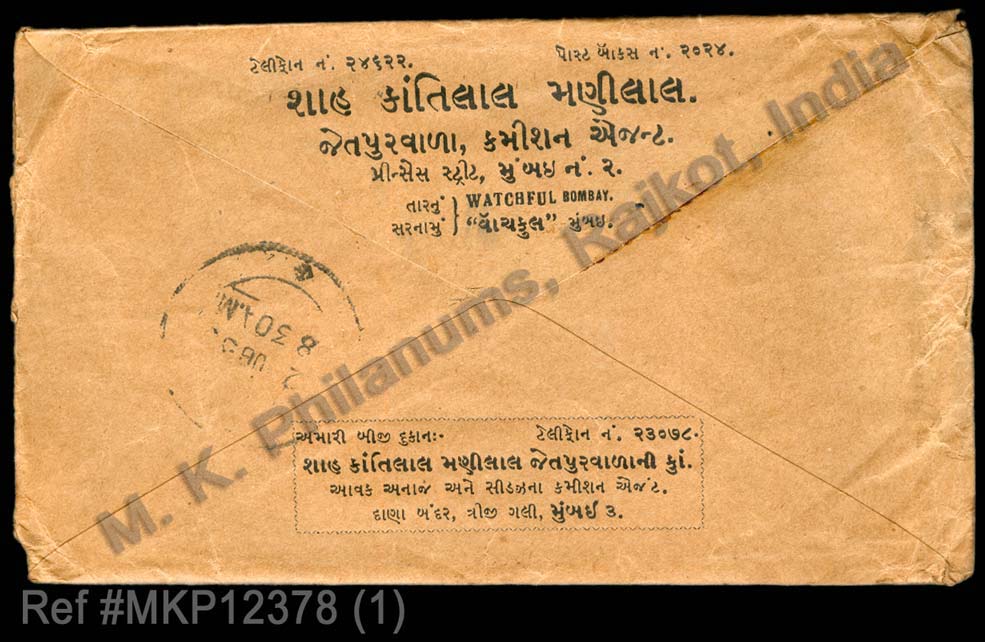 Item 3: A letter (no envelope) from Shri Nautamlal Bhagwanji Mehta (Kamdar) to his youngest son Shri Vrajlal, written from Bombay on 7th August 1930. 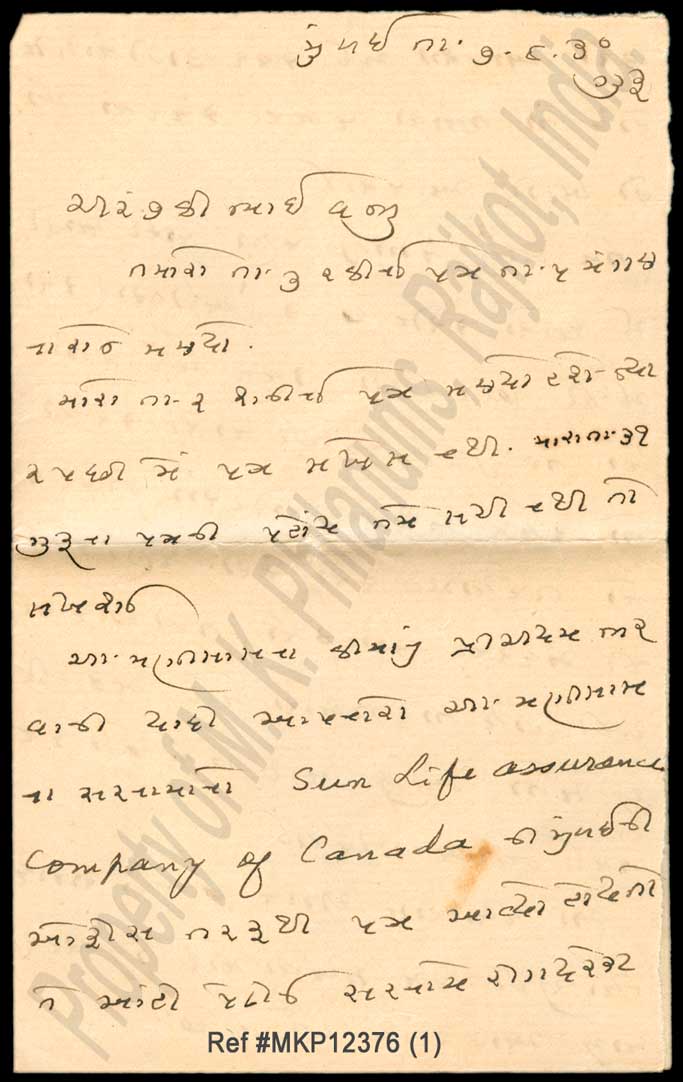 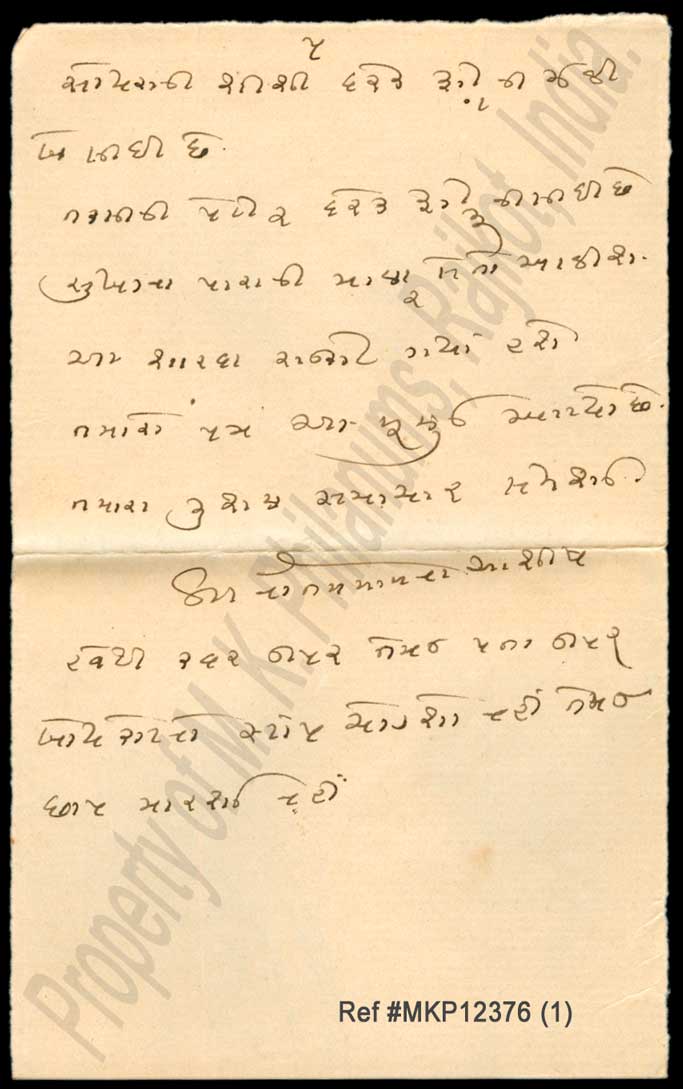 Below is the translation of the important matter of the above letter:

3rd Page, 1st Paragraph: “I have bought for you, 21 medals depicting photographs of different freedom fighters. I will arrange to send with somebody.”

4th Page, 1st Paragraph: “The verdict of the case on Sardar Vallabh bhai Patel and others have come. Pandit (Pt. Jawahar Lal Nehru), Malaviya (Madan Mohan Malaviya) and other four sentenced a fine of Rs.100. If they pay the fine then they will have to bare a 15 days ordinary imprisonment. Ordinary imprisonment of 3 months is sentenced to Sardar Vallabh bhai Patel and rest.”

5th Page, Last Paragraph more like Postscript: “Now onwards do not use the Boycott British Goods rubber stamp and labels on the covers and postcards.” 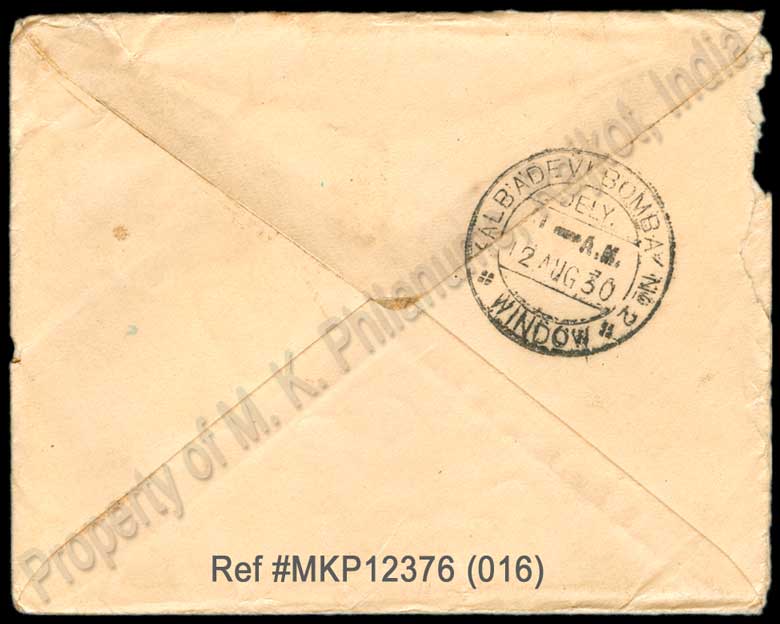 Below is the letter written by Shri Vanita: It is just a simple letter from a daughter to her father – typical family correspondence. Affixed with the Boycott British Goods propaganda label depicting Jawaharlal Nehru with slogan in Gujarati BOYCOTT BRITISH GOODS, very scarce label. Message to her uncle (Shri Chamanlal? Younger brother of Shri Nautamlal B. Mehta) is written on back, typical family correspondence.

Below is the letter from Shri Vrajlal: 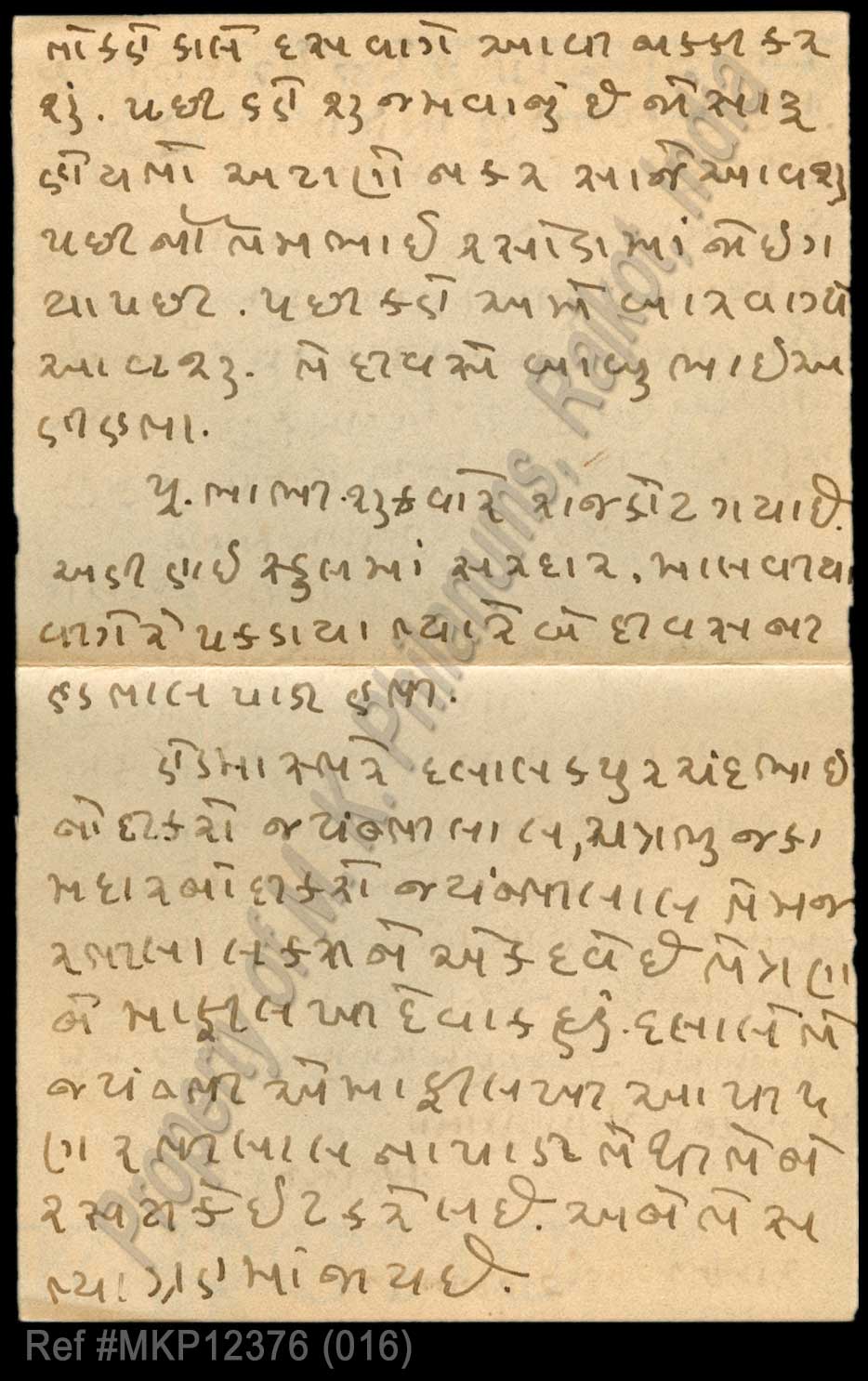 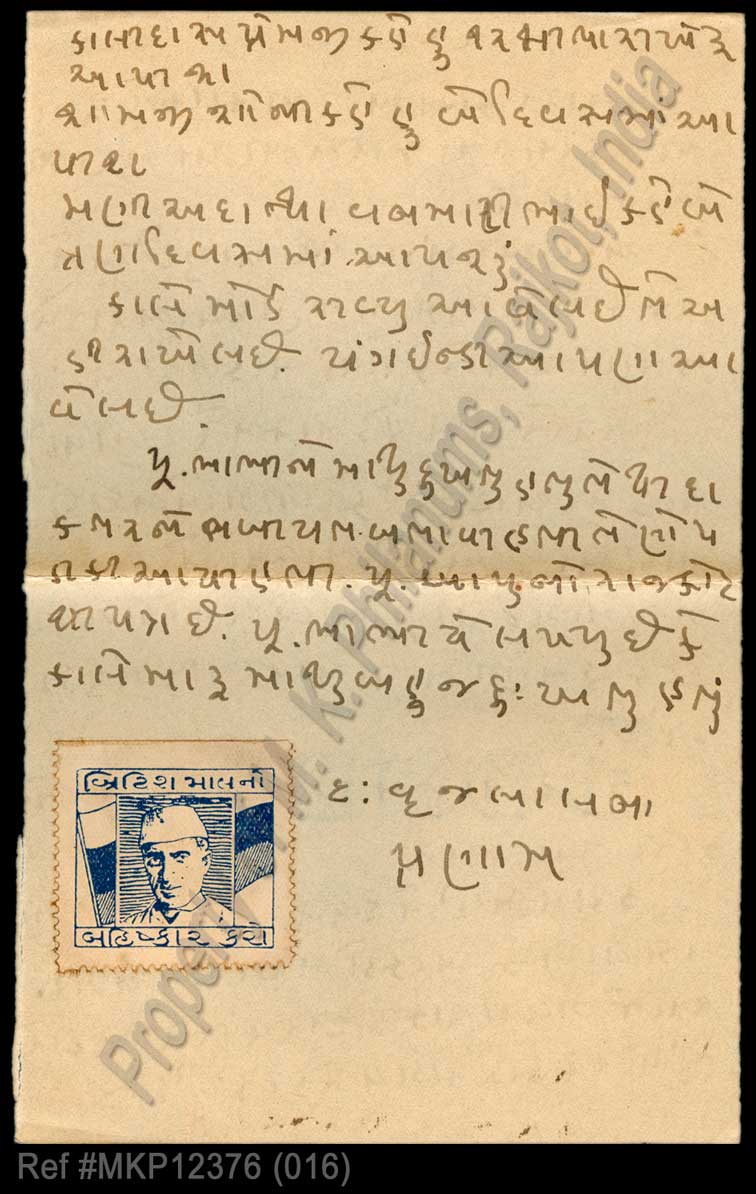 Translation of the important matter written in the above letter is as under:

Second Paragraph, 1st page: “However the post office has made a law (that the articles bearing labels and rubber stamp impressions of Boycott British Goods will be destroyed from 09/08/1930) I want a rubber stamp to keep in the file hence bring it for me.” – This is in reference to Shri Nautamlal B. Mehta’s letter dated 07/08/1930. This letter of Shri Nautamlal Mehta is also offered herewith, kindly refer to the description of the item number 3.

2nd and 3rd Paragraph, Back side of the first page: “To boycott the arrest of Sardar (Sardar Vallabh Bhai Patel) and Malaviya (Shri Madan Mohan Malaviya) we arranged for a strike here in our High School”

1st Paragraph, 2nd Page: “As a good luck our class gave Ratilal a ‘Takli’ made of Silver (spindle used for cotton spinning) and a ‘Pandani’ (Box to keep the leaves) made of German Silver”

2nd Paragraph, 2nd Page: “Here we have made an organization and three persons from each classes keeps record that how many joins the strike”

At the end of the letter there affixed a Boycott British Goods propaganda label depicting Jawaharlal Nehru with slogan in Gujarati BOYCOTT BRITISH GOODS.

Item 5: A letter (no envelope) from Shri Vanita to her father Shri Nautamlal B. Mehta (Kamdar), written from Jetpur on 26th August 1930. Letter tied by a round blackish violet rubber stamp with propaganda slogan in Gujarati “BRITISH / MAL NO / BAHISHKAR / KARO” (Boycott British Goods) in four lines and a  propaganda label depicting Jawaharlal Nehru with slogan in Gujarati BOYCOTT BRITISH GOODS at the bottom of the letter.

At one place Shri Vanita writes in this letter to her father that Bapu and Baa were going to come to meet but haven’t yet come. Here ‘Bapu’ and ‘Baa’ could be Mahatma Gandhi and his wife, Kasturba Gandhi. A short letter. Below is the image of this letter: 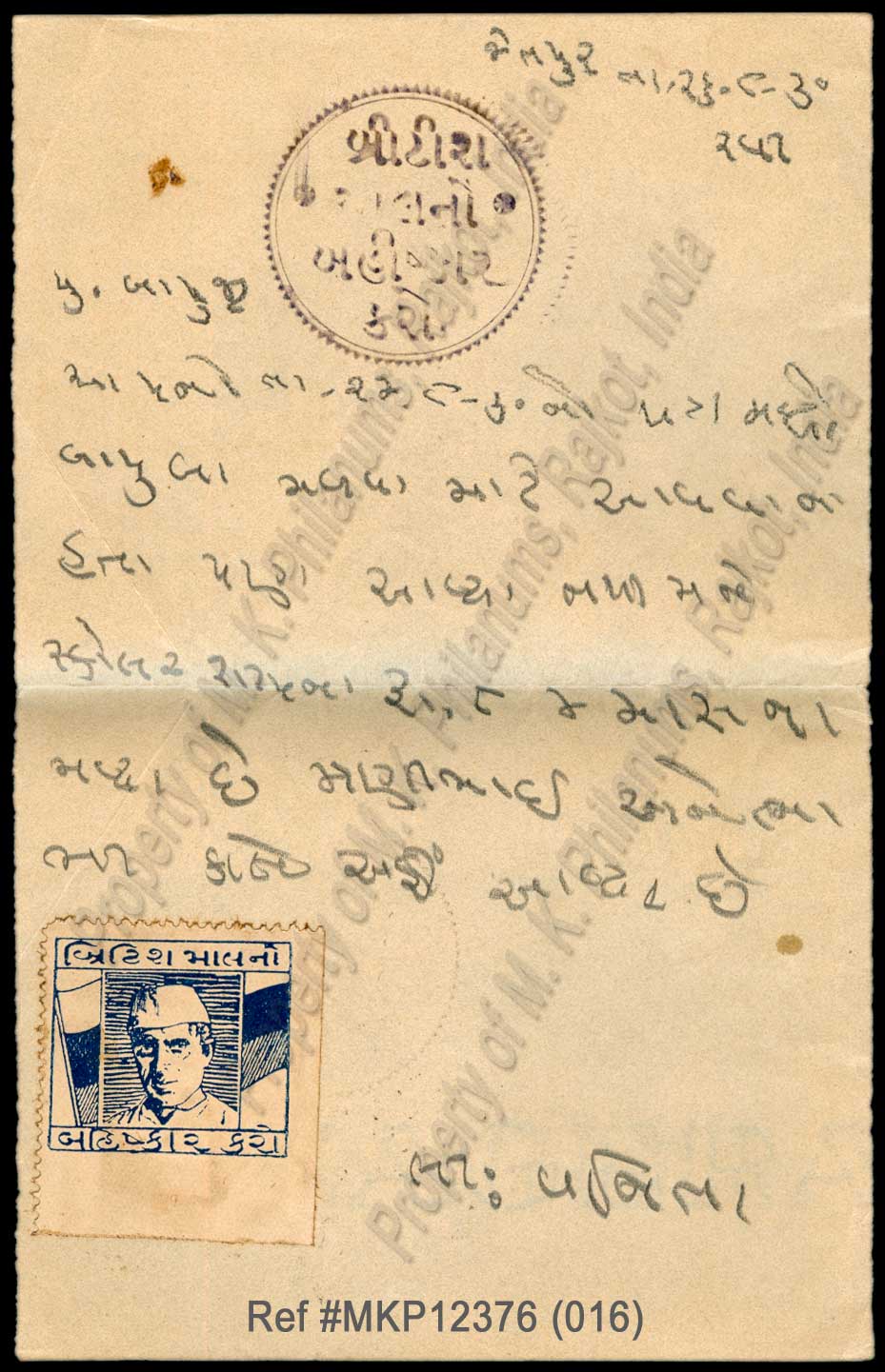 Director General of Indian Posts and Telegraphs prohibited the use of Boycott Propaganda Labels and hand stamps from August 9th, 1930 vide a postal notice published in Indian Gazette.

“Boycott British Goods” was the slogan of ‘Swadeshi’ movement, part of the Indian independence movement. It was a successful economic strategy to remove the British Empire from power and improve economic conditions in India through following principles of swadeshi (self-sufficiency). Strategies of the swadeshi movement involved boycotting British products and the revival of domestic-made products and production techniques.

Swadeshi Movement emanated from the partition of Bengal, 1905 and continued up to 1908. It was the most successful of the pre-Gandhian movements. Chief architects were Aurobindo Ghosh, Veer Savarkar, Lokmanya Bal Gangadhar Tilak, Bipin Chandra Pal and Lala Lajpat Rai.

Swadeshi, as a strategy, was a key focus of Mahatma Gandhi who described it as the soul of Swaraj (self rule).

including letters addressed to the Nautamlal Mehta and family members.

All the items offered here are shown in the above images.

These are the rare bits of Indian history. Once in a life time opportunity to add these to your collection.

P a y m e n t: However we accept PayPal we prefer

wire transfer of the funds to our bank account.

Check out my other items!

Be sure to add me to your favorites list!